Make Money Where You Deliver Value 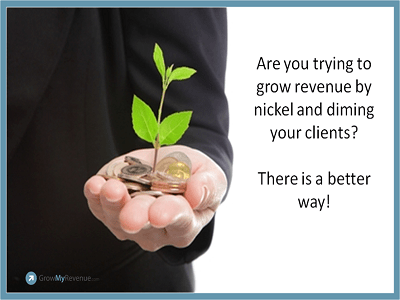 I was flying back from a speaking engagement in British Columbia, and was chatting with the person seated next to me. She was expressing frustration dealing with her current law firm.

It seems that on every invoice, she saw hundreds of dollars of charges for photocopies and phone calls. I asked why it bothered her and she said “I don’t mind them recovering their costs to make copies, but it is clearly a profit center for them. They’re not Kinkos.  This is a law firm! Charge me five dollars more per hour. Just don’t nickel and dime me.”

Is It Worth It

It irritates me when a hotel charges for Internet access. I often hear customers complain about petty charges. I was checking out of a hotel in New York City recently. The room charge at this property exceeded $400 per night. As I was leaving the hotel, a guest I had never met said to me “I can’t believe they charge $15 for Internet access. I’m never staying here again.”

I recall reviewing bills from a vendor. Included in their large bill was time to assemble our invoice. They also charged us a premium for the postage to send us the invoice. We were afraid to send them payment for fear they would bill us for the time it took to deposit the check. We were generally happy with their services, but we switched firms because of those nuisance charges.

It used to be that you could sell an inexpensive product, and then charge a high shipping and handling fee. Today, companies that do not charge for shipping (both ways) like Zappos and Nordstrom are also the ones with the most loyal customers.  It used to be that on eBay, people would sell an inexpensive product and make their money on shipping. Now, the most popular sellers offer free shipping.

I’m betting that an accountant at an airline suggested they charge for checked luggage. It means that on those airlines the cabin is crowded with excess baggage. The passenger who thought they saved $40 on their flight, ends up paying an additional $100 for luggage.  The airline may have won the battle for that flight, but they will ultimately lose the loyalty war. The passenger is not likely to fall for the same trick, again.

The excuse I often hear from companies is that the customer beat them up on price, so they have to make up for it elsewhere. Translation, “We stink at negotiation, so we’ll get even by charging for other stuff.” My suggestion: Teach your team how to sell on value over price.

Where Do You Add Value

Zappos and Nordstrom charge retail pricing, but their customers are incredibly loyal. They provide exceptional customer service and perceived value. They make money on the areas where they add value, and do not charge for nuisance items. The bottom line is that you should not charge for something just because you can. Rather, charge your customers when you deliver value. They will be willing to pay even a bit more when they receive value, and you will build loyalty and appreciation.

When have nuisance fees caused you to switch vendors? OR Why do you feel it is OK to charge for additional items?